skip to main | skip to sidebar

I was honored to have four more panels of these great musicians commissioned. A blast of colors and textures demanding a "kool" look and so it is! 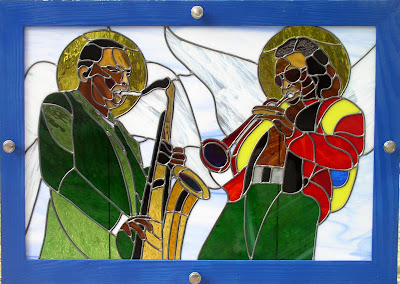 “The Angels” are two figures somewhat based on the presence of John Coltrane and Miles Davis. Although these actual legendary forces passed in 1967 and 1991 respectively, the blessings of their musical legacies have had immeasurable influence and inspiration to Kool & the Gang, and to all bands, especially those with pronounced horn sections. This is a respectful tribute and an acknowledgement that the angels are being felt, heard and now seen. This piece was created for the KOOLZEUM and was exclusively designed by Cleveland Brown and Olimpia Perez. 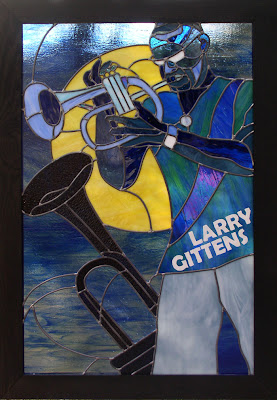 Joining the band in 1975, Larry Gittens was already an established professional and was actively touring and recording with Stevie Wonder. His reasons for working in Kool & the Gang were to “keep sharp and the Gang’s horn lines are the most intricate in the business.” Gittens has remained on active duty to present with both acts, even becoming Wonder’s Musical Band Director and miraculously finds time to pursue a solo career. He is one of the most respected musicians in the business. This was designed by Cleveland Brown and Olimpia Perez and is exclusive to Cleveland Brown’s KOOLZEUM. 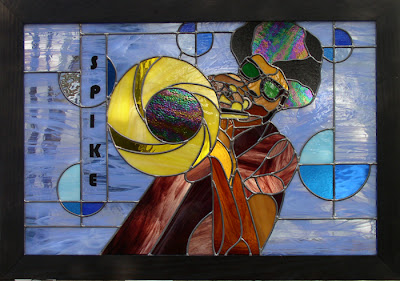 An original band member, Spike’s trumpet eloquence, percussion performance, and physical presence were defining high points of the core band from 1964 to the mid 1980’s. In addition to his musical talent, songwriting, and showmanship – Spike’s level of natural koolness was a patented rarity that cannot be found elsewhere. His style is one that is fiercely imitated and immediately recognizable. This was designed by Cleveland Brown and Olimpia Perez and is exclusive to Cleveland Brown’s KOOLZEUM. 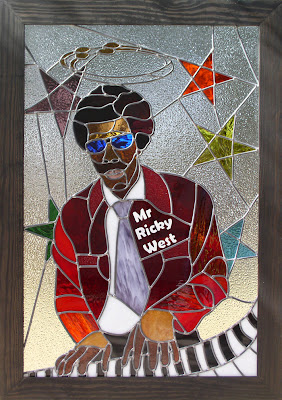 A founding member of the world’s Koolest musical entity, Ricky West wrote and lead sang on 1973’s smash hit Hollywood Swinging. His unique approach to all keyboards and lead and backing vocals cements him in the archives of pop music history. His likable nature, genuine quality and distinction came forth in every note of his music and this helped to shape the band for all time. West passed away in 1986 but his legacy is felt in the band today and his contribution was abundant. He released a solo album in 1977 titled “Ricky West and North South East.” This was designed by Cleveland Brown and Olimpia Perez and is exclusive to Cleveland Brown’s KOOLZEUM.

Posted by Glass by Olimpia at 5:21 PM

Beautiful work! You are very talented. As an artist who tried her hand at stained glass, I know the work that goes into them and the skill required. I did not have the patience for it and ever since have doubly admired stained glass artists... especially an uber talented artist such as yourself.

Thank you Val!
Thank you Robbin!

That is some beautiful work. You should be very proud.

You do have an awesome talent.

Thank you all who have commented on my blog, it means the world to me!

Thank you for memorializing the images of Spike Mickens and Rick Westfield. You captured them beautifully!

Rick and Spike are two of my all-time favorite Kool and the Gang members. Rick wrote and co-wrote many of the group's songs.

Spike was so cool. I miss both of them dearly.